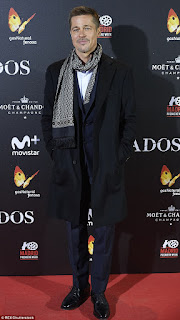 Brad Pitt was pictured in Madrid last month, probably for the Olympics or to apply for benefits or whatever it is people do in Europe I have no idea. He was in an overcoat and scarf even though the average temperature in Spain in November is usually around 62 degrees dipping down to a dangerously low 46 degrees at night. When I woke up this morning where I live it was -3.  Brad Pitt's snazzy little scarf would have been a useless annoyance. I would carpet bomb Aleppo for 62 degrees right now.

Posted by Reverend Bobby at 5:27 PM