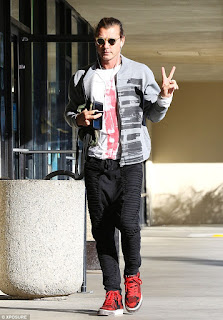 50 year old Gavin Rossdale was out walking around dressed like a creepy uncle at a Taylor Swift concert still wearing his wedding ring because apparently he's the only one that doesn't realize his future ex-wife is already getting hosed by some other dude.  Hey man, listen. Your band sucked but you know what? I'm a dude too so I get it. Just come on over and we'll get you fixed up in some decent clothes from somewhere other than Express For Men or Merry-Go-Round or wherever the hell it is you bought that crap.

Posted by Reverend Bobby at 9:15 AM