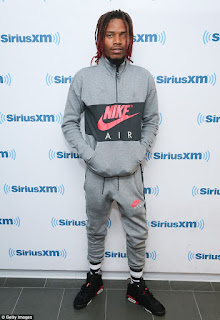 Rapper Fetty Wap, whatever the fuck that means, was arrested for drunk driving early this morning. A New York Police Department spokesperson says...


“[He was] in the vicinity of Hamilton Avenue driving recklessly at a high rate of speed causing a dangerous condition while racing another vehicle within the confines of the 72 precinct,” the spokesperson says.

He faces 15 charges in total, including reckless endangerment, drag racing, DUI, driving without a valid license, unsafe lane changing, aggravated unlicensed operation of a motor vehicle, following too close, and speeding. All of which probably come with surprisingly harsh punishments. I knew this one lady that got her third DUI and they put her in prison for three years. Not jail. Prison. For three years. Well, whatever they decide they better hurry up and fine him while he still has money.
Posted by Reverend Bobby at 4:12 PM