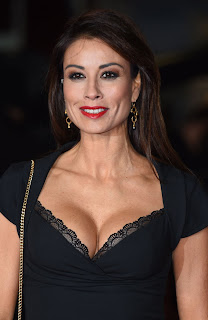 Melanie Sykes is a British "TV presenter" which means she's a news anchor? A game show host? Weather/Traffic person? I don't know their language over there is so weird. "Aluminium"? What the Hell is that?? In her latest interview she claims to prefer younger men...

Sure, "younger" men. She's rumored to be dating some dipshit named Olly (?). There's only one problem. He's 33 years old. I know mathematically he's younger but c'mon. By the time my Uncle Al was 33 years old he fought in two wars, was married and was on his second kid. By age 33 even I had a job and a mortgage and I'm a goddamn imbecile. I don't know maybe I'm behind the times. Look Melanie, when you're done fooling around with the kids I have a more mature man in mind for you. It's my neighbor John. Nice guy. He's a pretty good carpenter too.
Posted by Reverend Bobby at 10:12 AM