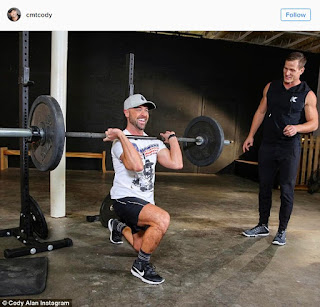 Country music "star" Cody Alan is gay. Good for him. I really don't know why we're supposed to give a shit who is or isn't gay. Just play your stupid country music. I didn't even know this asshole existed until about seven minutes ago and now I know he's gay. Not everyone has to know who's sleeping with who all the time nobody fucking cares. The one thing I never really understood is how you go from having a wife and two kids to being gay. I couldn't be gay and have a boyfriend because I like girls. There isn't anything I want bad enough in the world that would make me pretend to be gay for even one minute, so how gay guys pretend to be straight, and even have a bunch of kids, is something I'll never understand. How did his wife get fooled? I can tell he's gay just by looking at that doctored picture that's full of muscular men in tight clothes. That picture is faked, by the way. Just so you know that's almost 150 pounds he's holding. Those weights are (supposedly) 45 pounds each and so is that bar. 45x3 =135 pounds. No one smiles that gayly while lunging with that much weight. Especially a guy that doesn't really look all that muscular. Don't believe me? Try it. Let me know how it goes. I'll dial 9 and 1 and when you call me to tell me you've broken your back I'll dial the last 1 and get an ambulance to you.