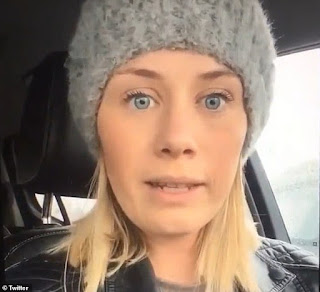 Katie Sorensen is what they're calling a wannabe "momfluencer". First of all, stop saying "momfluencer". If you take nothing else away from this, please let it be that. She faked an attempted kidnapping by two people in Sonoma County, California. This is how desperate for internet fame people have become. This idiot would have happily and without a second's thought, absolutely ruined two peeople's lives because she wanted attention. What a disgusting pig of a human.

She said: 'My children were the targets of attempted kidnap which is such a weird thing to even vocalize but it happened and I want to share that story with you in an effort to raise awareness to what signs to look for and to encourage parents to be more aware of their surroundings and what is going on around them.

'I think right now that we are so distracted with everything that's going on in the world that we are have our guard up so much about masks (ED: always with the masks) and wanting to keep out children safe that way that we're forgetting the most important way to keep them safe and that is with us.'

According to the police statement, Sorenson said that she noted the suspicious behavior of a man and woman as they followed her and her children around the store and made comments about their appearance.

She told police that they followed her out to her car and lingered by the stroller as she placed her kids back inside the vehicle.

Police said Sorenson had not wanted to have anyone arrested when she filed the report but 'wanted to draw attention to the concerning behavior exhibited by the couple'.

The couple was later cleared and she faces two misdemeanor counts, one for giving false information to a police officer, and one for giving false information to a police dispatcher. I'm sorry but this needs to stop. Want to stop shit like this? She should be given time at least equal to half of what those people would have been given had they been convicted. Lock her away and weld the door shut and that would make a lot of these nitwits think twice. You can tell she has a screw loose just by looking at her, she wouldn't be missed.

Posted by Reverend Bobby at 8:02 AM