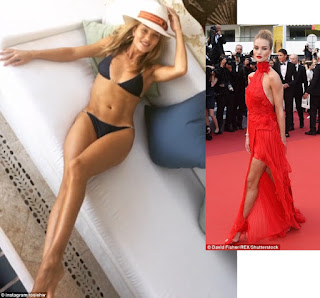 Rosie Huntington-Whiteley is a Victoria's Secret model and not a cast member of Mad Men like I originally thought. Is that show still on or did it morph into The Walking Dead?  She looks much, much better without makeup (or at least less makeup) because when she's all dolled up, she kind of looks like a scorned woman from the 1930's that's gone insane and is waiting for you in her car with a giant butcher knife in the pouring rain as you leave a fancy restaurant with your new supermodel girlfriend. Take it easy Rosie I told you I was a free spirit.

Posted by Reverend Bobby at 3:27 PM