Traitor to be Traded? 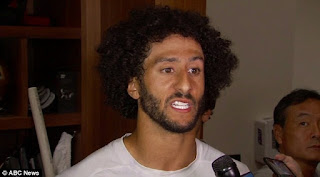 Colin "Spoiled Brat" Kaepernick is likely going to be cut from the San Francisco 49's, but not for political reasons, oh no not at all...


the 49ers are deeply concerned with Kaepernick’s decline as a player, which started last season when he struggled before getting benched, then got even worse this offseason when he lost significant muscle mass when he couldn’t work out following multiple surgeries.

The guys a punk. Cut his ass. He says if he loses his quarterback position or if he doesn't play professional football ever again he'll just switch to "social activism". HAHA. I wonder how much social activism pays. I bet it's not $114,000,000 over the course of six years. Maybe he's taken one too many blows to the head, that's the only thing I can think of.
Posted by Reverend Bobby at 7:30 AM