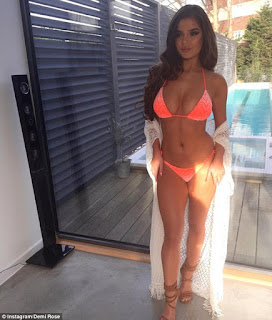 There's apparently a rapper named "Tyga" because why wouldn't there be. This is his ex-girlfriend "Demi Rose" because why wouldn't she be. On the plus side she has yet to infect the planet with any offspring which I can imagine might happen anytime now. While she claims to be 26 years old, looking more closely at some of her pictures I'd bet she was 19 at the absolute most. Mostly because she has one of those giant teenager heads. Do you know what I mean? Like a balloon with a face and a big forehead. She also has one of those disgusting gigantic asses which you can't see in that picture because despite what you read about constantly on the internet, only circus freaks and rappers think that's attractive and she knows it so she's trying to appeal to the most people possible. This post is going nowhere and I'm already sick of this idiot.

Posted by Reverend Bobby at 5:51 AM