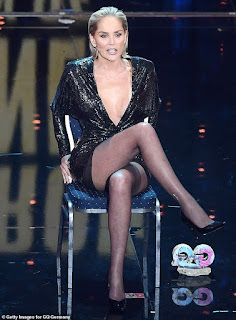 This is Sharon Stone last year in Berlin. Judging by how she's dressed I assume it was something to do with "Cabaret"  but I HATE musicals so I don't care. What I do care about, is that Sharon Stone told Telegraph Magazine that she doesn't like online datin.

Honestly the whole thing was so dismal that I now want to write a book of short stories about my online dating experiences,' stated the Casino actress. 'Dating sites are just not a successful thing. Because real chemistry, that frisson, that happens in the air - not on a site.'

It was a lot of fun when we were allowed to whistle and flirt, but that era has passed. 'It is sad. But people just aren't like that any more. 'Technology has taken away the whole interpersonal flirtation thing anyway, so now it's not even in the air: people just don't flirt face-to-face. 'And I don't think it has anything to do with you or me [getting older].'

While she's been an advocate for the MeToo moment, the Basic Instinct star insisted she 'doesn't really care' if guys touch her butt or refer to her with terms such as 'honey' or 'darling' as she thinks there are more important things to fight over.

Can you even imagine talking to somebody on some website, and you both like the same music or movies or whatever, and you arrange a meeting somewhere and fucking Sharon Stone shows up? What would you do? You wouldn't touch her butt I can guarantee you that much. You'd shit your pants that's what you'd do. Everyone is a big talker on the internet, and now all the sudden it's time to put your money where your mouth is. Could you? I bet you couldn't. Pussy. But I could. Hey Sharon, why are you messing with these children, I've been right here the whole time. Bring the Cabaret outfit.

Posted by Reverend Bobby at 4:09 PM